Explore exotic coastlines and ports, enjoy spectacular scenery, and swim in crystal clear waters. Walk through the narrow streets of Mykonos’ old town and enjoy the glamorous atmosphere of Greece's most famous cosmopolitan island. Visit the ancient sacred island of Delos. Explore Naoussa, the beautiful picturesque fishing village in Paros turned into a cosmopolitan top holiday destination. Discover the golden beaches at Ios and the unique natural landscape at Milos. Experience the world’s most famous sunset and breathtaking views of the volcano at Santorini. Discover the unique sea color, the sun and light, the bays, the history and cultural attractions and take home the most unforgettable memories.

DAY 1 CHECK IN (DEPARTURE TO KYTHNOS)

Beautiful beaches, windmills, cobbled streets, whitewashed houses, picturesque town, and a bare landscape, “embroidered" with stone walls are sure to excite all those looking for a holiday destination authentic and welcoming. This is Kythnos or otherwise Thermia (due to the hot springs in the bay of the Baths, where there is the Spa) .The elements that make Kythnos so beautiful are: firstly the 65 sandy beaches with crystal waters (Kolona is one of the best beaches in Cyclades), the traditional villages with smiley local people and finally romantic restaurants by the beach. A well-hidden paradise is waiting you to be revealed!

Mykonos (or Island of the Winds) is Greece's most famous cosmopolitan island! It is one of the most popular destinations all over the world that voted several times as one of the best summer holiday destinations. Magnificent beaches with green, blue and turquoise waters and golden sands are some of the best beaches all over Aegean Sea. Satisfy your appetite for luxury and adventure in this cosmopolitan island that provides whatever you desire!

Delos, it’s a UNESCO world heritage site. The Apollonian light. According to Greek mythology, Delos was the birthplace of Artemis and Apollo, the twin offspring of Zeus by Leto. The summer sun reflecting off the marble and baked stones may be blinding, but for the Ancient Greeks it also symbolized the light of inquiry, reason and harmony. It’s a chance to walk around the revival of the glory of the Greek civilization. It’s the head priest of the Cyclades, the birthplace of the immortals. It is not an educational trip, it is an embarkation to a lifetime experience.

Rhinia is one of the small islands immediately southwest of the island of Mykonos in the Cyclades archipelago. It is a hilly and fairly dry island where you can find a couple of beautiful sandy beaches. A key piece of the world’s cultural heritage and an archaeological site in itself. According to an old reference, the Tyrant of Samos Island, Polikratis, had devoted this island to Apollo, one of the 12 Gods of Ancient Greece, by tying it to Delos Island with a big iron chain, in 523 BC. On the island one can find four solitary, sandy beaches named Glyfada, Stena, Lia and Ambelia, which are protected by two coves. The sea has a very beautiful blue/green colour that changes as you approach the shore. Sandy coves, clear crystal waters and uncrowded beaches are a Rhenia island specialty.

Naxos Island is the largest island in Cyclades and it is one of the most beautiful among the Greek Islands. Long beaches and mediaeval towers, lush valleys and high mountains... and outstanding local products make it an unsung gastronome’s treasure trove.The western side of the island is the most tourist developed and has long sandy beaches lined up with seaside hotels, restaurants and water sports centers. The eastern side is more secluded and non-organized. A drive around the center of the island brings visitors to traditional villages and interesting historical sites. Numberless beaches ideal for families, extreme sea sports' fanatics, such as Agia Anna beach, or romantic couples looking for private beaches, the best beaches in Naxos are mostly gathered on its western side, right after Naxos Hora. Some of the best beaches are Agios Procopius, Orkos, and Mikri Vigla.

The beautiful island of Paros is located in the heart of Cyclades and its well known for Parian marble which sculpted few of the most famous ancient statues. It can offer you the best holidays you ever dreamed of. Infinite lacy beaches with golden sand and turquoise waters, old Christian and Byzantine churches, Venetian Castles, traditional villages with whitewashed cubic houses and breathtaking landscapes make Paros a place that you have to visit and one of the most loved destinations in Greece.

Ios Island in Greece is a famous tourist destination, attracting visitors with its golden beaches and the characteristic Aegean architecture. Ios is well known as the party island with the lively atmosphere and the endless fun. It is well known for its nightlife with sounds from every corner of the planet and offer all kind of entertainment.

The power of this volcanic island creates an energy that overwhelms the senses.
A 4.000 year old history and the eternal rock continues to stand, strong and majestic, rising proudly from the sea and guarding well the secrets of Atlantis...Cousteau looked for the lost city of Atlantis here. The precious gem of the Aegean, is actually a group of islands consisting of Thira, Theresia, Asproníssi, Palea and Nea Kaméni in the southernmost part of Cyclades. On this island all senses are magnified, a product of its many contrasts: black earth against whitewashed homes clinging to the cliffside, or wild volcanic sculptures against sleek Cycladic lines.Enjoy a leisurely stroll from Fira to Firostefani and Imerovigli.Experiecing the sunset from Oia, the energy of the landscape is palpable. When the fiery sun sinks into the Aegean, this sunset will forever have a place in your heart. Try the one-of-a-kind whites and reds of Santorini, especially the renowned Vinsanto from the volcanic vineyards that are over 3,200 years old.Enroll on one of the many culinary classes on offer and learn to make Santorini’s rich and varied delicacies: tomato patties, sfougato, melitinia and sweet koufeto.

Get to know the most exotic island in the Aegean, the island where Aphrodite of Milos was discovered. The volcanic activity in ancient years has endowed Milos Island with an exciting variety of gorgeous landscapes, consequently offering the visitor a wide range of activities. Milos is famous its dentelated coastline. With more than 75 small and big beaches of crystal, deep blue waters, multi-colored carved rocks and white-yellow coasts, it is certain that you will be impressed.

In the infinite charm of the Aegean Sea, Serifos the "iron island" of the Cyclades stands out, in its unique way and beauty, enchanting the visitors at first sight. The island of Perseus and the Cyclopes. Here you can relax and enjoy nature. Untamed beauty that changes with the light.You can entertain in the bars or have a romantic evening, viewing at the sunset. Serifos is one of the islands with not big tourist development. It keeps unchangeable her traditional island feature.It boasts 72 (yes, seventy two) stunning beaches, several points of interest and many oddly enough secret places which are waiting to be explored! Blue or green, shallow or deep waters, sand or pebbles, shaded or not, blessed by a chapel or outfitted with a taverna. Lia, Koutalas, Vagia, Ganema, Kalo Ambeli, Psili Ammos, Sykamia are some of the best beaches that you may visit. There are numerous amazing, exotic coves, underwater caves, tiny islets and crystal clear waters waiting for you to investigate them! 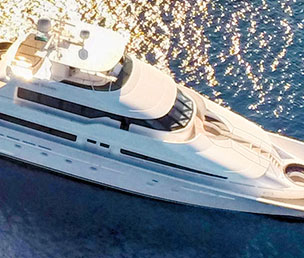 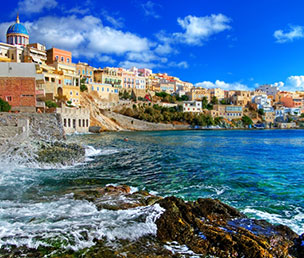